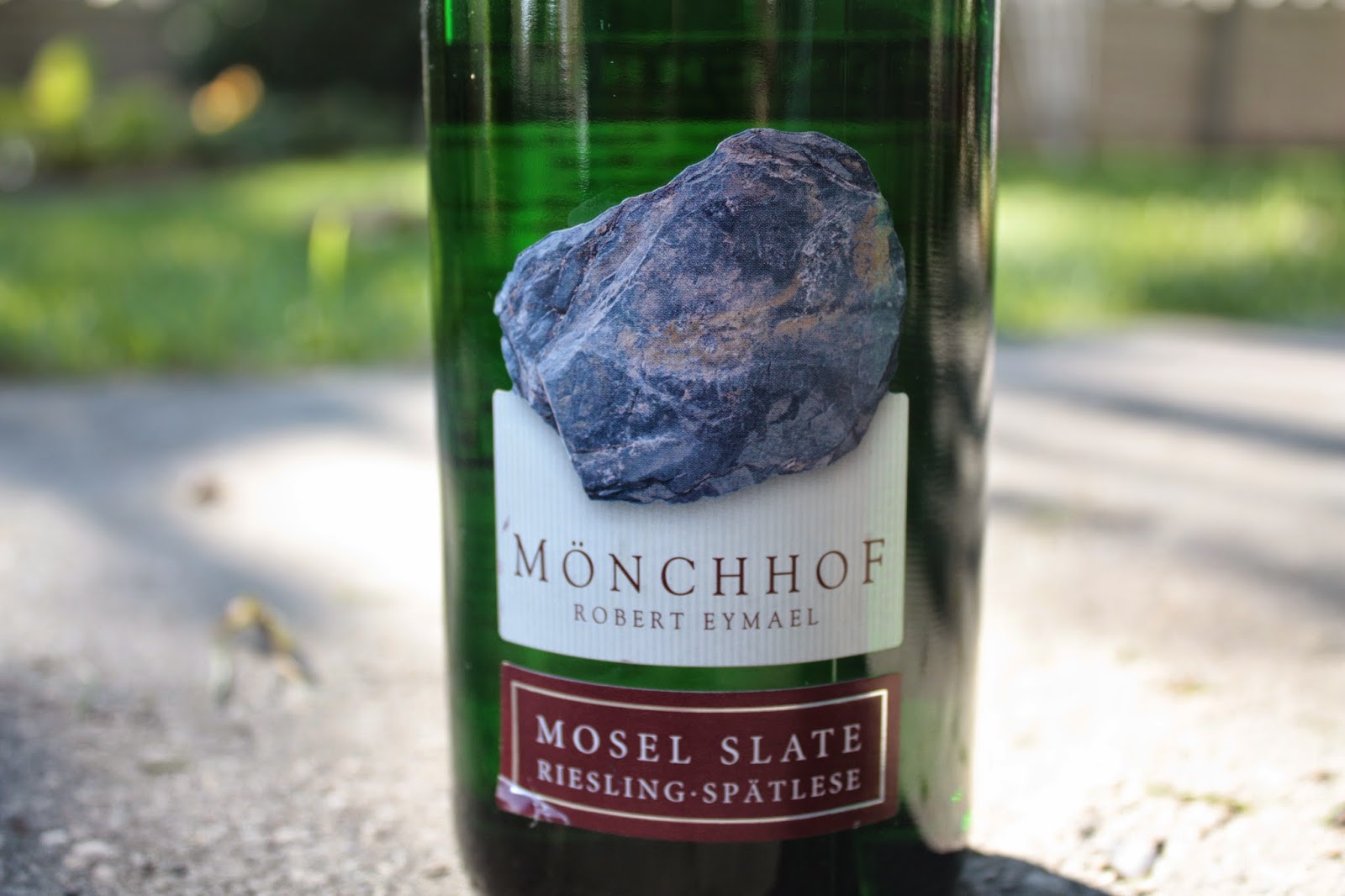 The next up on the Drunk on Geology series is the Mosel Slate Riesling wine from the Mönchhof winery, which is from the Mosel region of Germany.

The Mosel Slates are comprised of two main slate deposits, Ürziger Würzgarten and Erdener Treppchen.
The Ürziger Würzgarten (pictured below) means "The Spice Gardens of Ürzig". These rocks are a very iron-rich Lower Devonian slate (~400 million years old) mixed with volcanic rocks in the soil. Oxidation of the iron gives the rocks their characteristic red color. The oxidation of the iron is what would typically be called rust.
The Erdener Treppchen (pictured below) means "The Little Staircase of Erden" and consists mainly of a red iron-rich slate as well. The little staircase is because of the steep nature of the valley, stairs needed to be cut into the hillside in order for it to be cultivated.
These slates are part of the Rhenohercynian within the Rhine Mountains of western Germany. The slates formed from a shallow marine shelf environment. Even though slate is a metamorphic rock, meaning that they formed from shale that had been subject to increased heat and pressure, these are low grade slates, which are pretty close to shales in composition. Many of these slates even still contain fossils, which would normally be destroyed in the metamorphism process. Although the principle slates of the region have the distinctive red hue, there are the well known blue slates of the region from which the picture on the bottle was obtained. 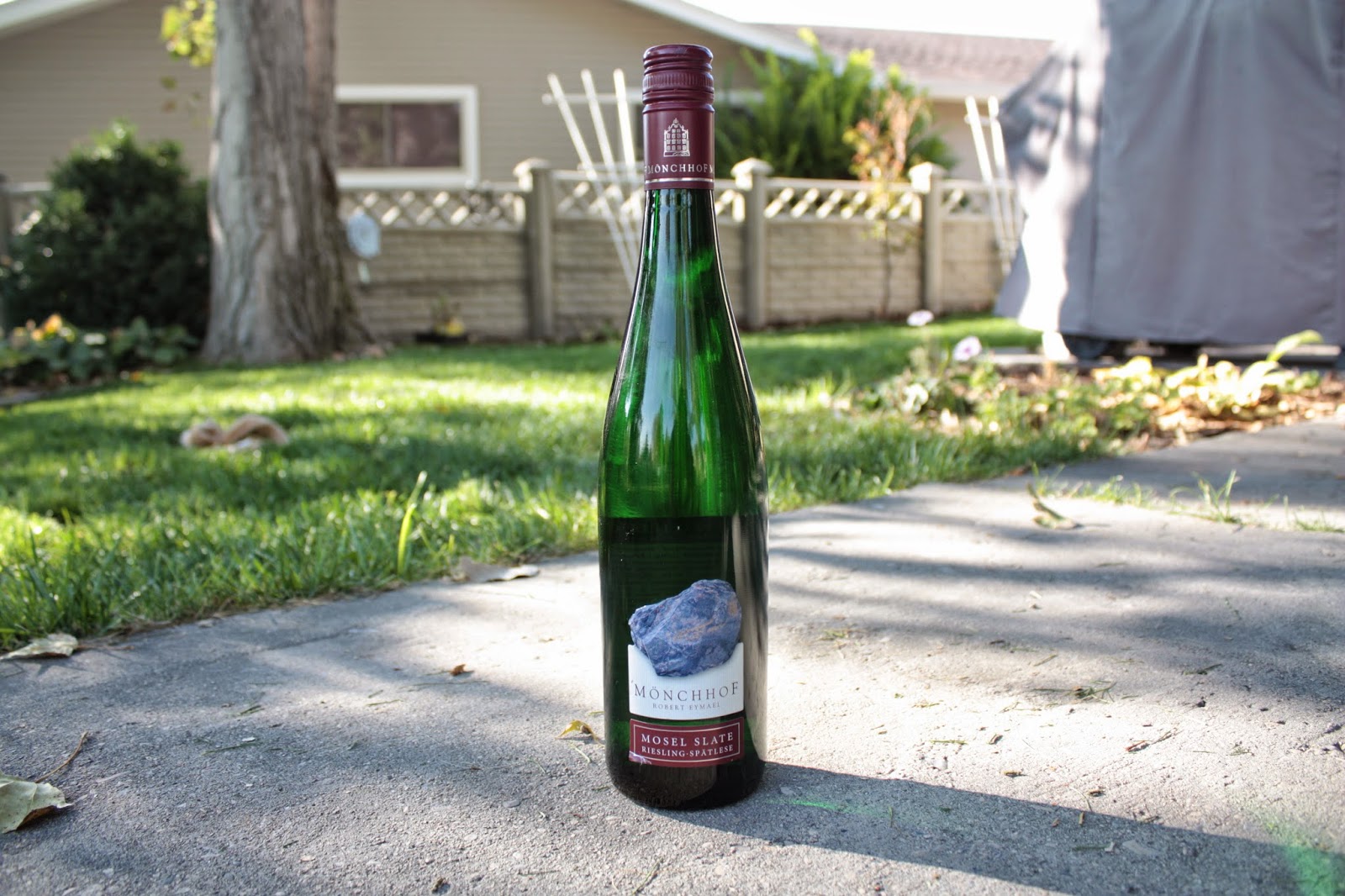 Blue slate has a different mineralogical composition than red slate. While red slate has a high abundance of iron oxide (rust), blue/grey slate does not have as much iron oxide. Iron oxide is a very powerful coloring agent, so that a very little bit goes a long way. Therefore rocks that aren't tinted red, orange, yellow, or even purple, likely don't have much iron oxide within them. This means that when the shale was originally deposited it was likely deposited within an environment without oxygen. Oxygen is what turns iron deposits red. The blue/grey slates also will have other minerals within them including calcite and muscovite, a fine-grained, flaky mineral produced in the metamorphism process. Slates with more muscovite content likely have a higher grade of metamorphism (higher heat and pressure), than the lower grade ones that still contain fossils. 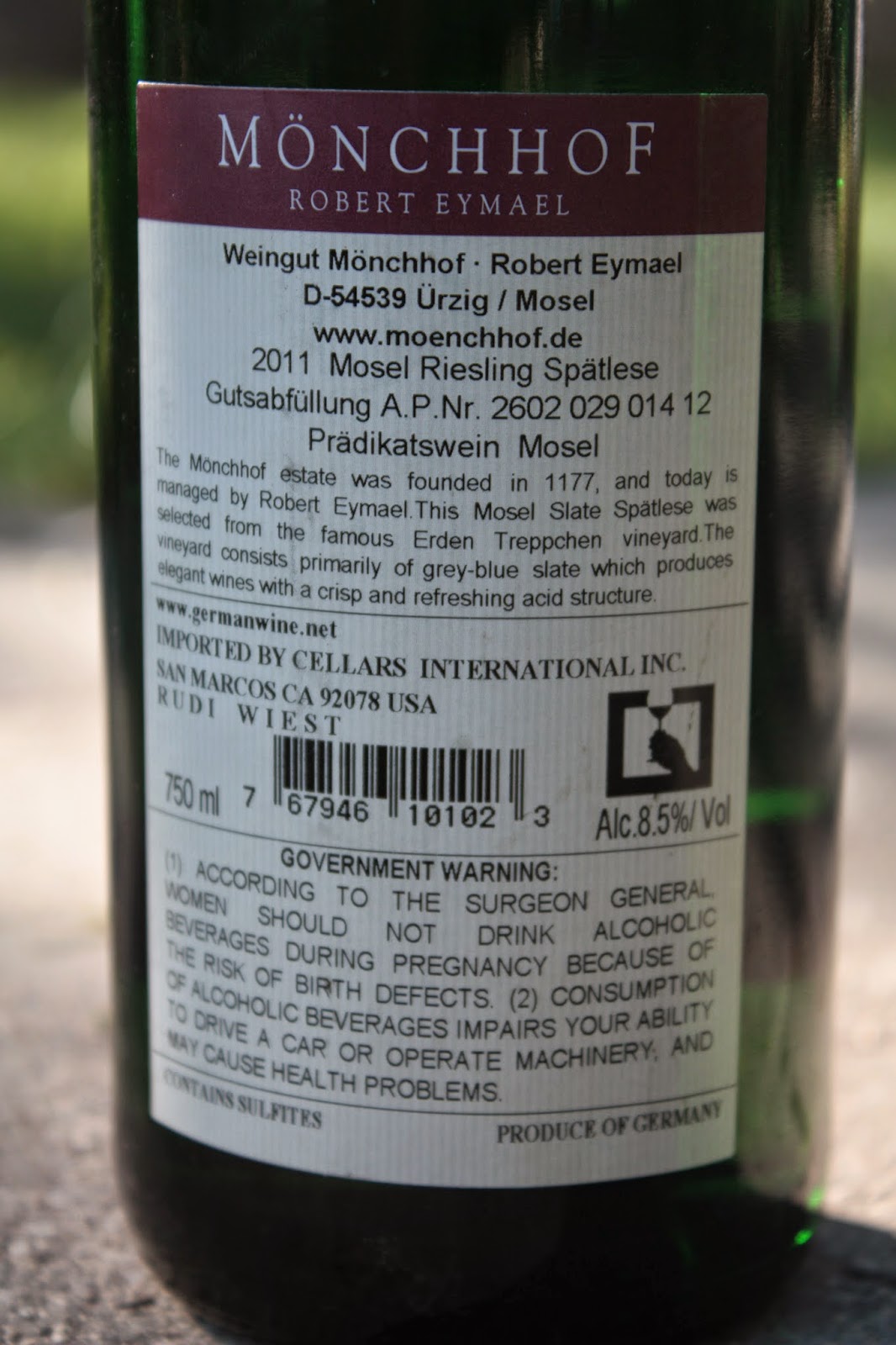 The back of the bottle states:

"The Mönchhof estate was founded in 1177, and today is managed by Robert Eymael. This Mosel Slate Spätlese was selected from the famous Erden Treppchen vineyard. The vineyard consists primarily of grey-blue slate which produces elegant wines with a crisp and refreshing acid structure."