The next up on the Drunk on Geology series is Black Opal. Black Opal is a wine from Australia made by the Bronco Wine Company.

To start off, what is opal?
The chemical composition of opal is a hydrous silicon dioxide (SiO2.nH2O). Silica, SiO2, is more commonly known as quartz, and is one of the most common minerals on the planet. Opal then could be considered the hydrated form of quartz, however the water ends up making the properties of opal very different from quartz. Although quartz itself can come in a variety of colors (i.e. white, pink, purple, grey, clear), the colors within a crystal of quartz are usually pretty consistent. Opal on the other hand can often come in a wide range of colors, anything in the rainbow and beyond really, all within a single sample. And while quartz is often found in crystals, opal is amorphous, meaning it has no crystal structure. Also, since opal can have varying amounts of water (the "n" in the chemical formula), this actually makes is a mineraloid, and not a true mineral (minerals have a set chemical formula). Another primary property of opal is that it has a hardness on the Mohs Hardness Scale of 5.5 to 6, making it much softer than most gemstones (quartz is a 7). 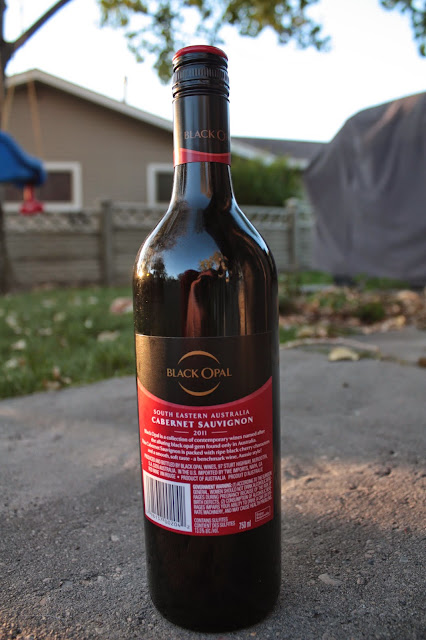 "Black Opal is a collection of contemporary wines names after the alluring black opal gem found only in Australia. The Cabernet Sauvignon is packed with ripe black cherry characters and a smooth, soft taste - a benchmark wine, Aussie style."

Opal forms from the seasonal rains that drench dry grounds in desert regions. The rain soaks into the ground surface, carrying with it dissolved silica. After the water evaporates, the water imbued silica is left behind, forming opal. There are two types of opal, common and precious. Common opal doesn't have a wide array of fantastical colors and typically can be confused for quartz or chalcedony. The precious type of opal is very different though, with a wide array of colors within a single specimen. Due to the formation of opal, it is often formed as sub-microscopic spheres that are stacked in a grid-like pattern. These spheres bend the light creating the array of colors, known as "play-of-color". The size of the spheres directly relates to the colors that you can see.

There are many different types of opal depending on the play-of-color that you can see.

So what is a Black Opal? Apparently it is "the rarest and most valuable type of opal." Is it a darker greenish opal variety with black and golds flecks. Black opal often contains a rainbow type iridescence, making it a very pretty gemstone. One of the world renowned locations for black opal is Lightning Ridge in New South Wales, Australia, which have sold for up to $10,000 per carat. And although black opals are most commonly from Australia, unlike what the bottle says, black opals have been found in other locations, most notably Ethiopia.
References
https://geology.com/gemstones/opal/
https://www.gia.edu/opal-description
https://broncowine.com/product-category/national/national-all/blackopal-national-all/
http://www.blackopalmine.com/black_opal.htm
https://opalgalaxy.com/3-64-carats-midnight-dream-top-gem-black-opal/
https://www.ga.gov.au/education/classroom-resources/minerals-energy/australian-mineral-facts/opal
at August 25, 2020