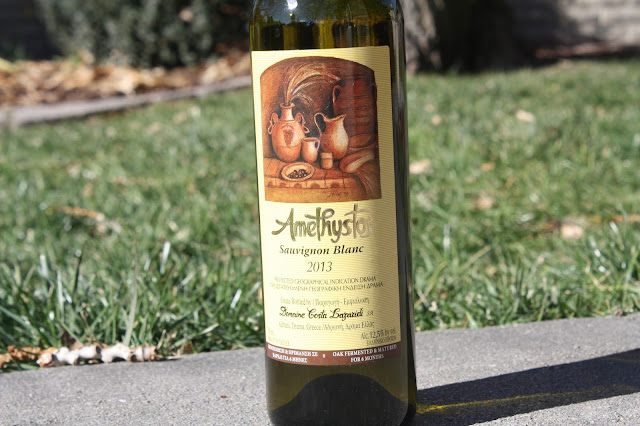 The next up on the Drunk on Geology series is Amethystos from the Domaine Costa Lazaridi Winery in Adriani, Drama, Greece.

And yes, in case you were wondering, "amethystos" is the Greek translation of the mineral amethyst.
Amethyst is the purple variety of quartz, which is one of the most common minerals on Earth, primarily due to its simple structure and chemical formula, SiO2. Quartz also has an extremely high hardness, 7 on Mohs hardness scale, meaning that it doesn't scratch very easily and therefore does not break down easily.
As the rocks on Earth are slowly eroded over time, most of the other minerals will break down into clay while quartz grains will generally just gets smaller and smaller. The result is that most beach sand is composed of quartz that has a slight hematite (rust) stain to it to give the sand grains their slight yellowish color. Although quartz is a simple mineral, it can come in a variety of colors depending on what type of impurities are present in the crystal structure; pure quartz crystal is clear, milky quartz is white, smoky quartz is grey, amethyst is purple quartz, citrine is yellow quartz, rose quartz is pink, as well as some other colors and varieties. Quartz does not have any cleavage, meaning that when it breaks it doesn't form along perfect surfaces. Instead as the quartz crystals grow, individual mineral molecules of quartz are added to the outside of the crystal from water rich in dissolved SiO2 or mineral melt (liquid rock like lava or magma). The purple in amethyst comes from the integration of trace amounts of iron into the crystal structure as the mineral crystal is forming. After crystallization, gamma rays produced from radioactive materials in the host rock irradiate the iron to produce the purple color.

Amethyst from Uruguay. Image from mindat.org.
To get a smidge more technical, quartz will often contain some trace amounts of iron ( ~10 to 100's ppm of iron). Some of the iron will be where the silicon (Si) sits and some located interstitially, where there aren't normally atoms. The iron that is sitting in for Si is usually in the +3 valence state, however gamma radiation from local radioactivity can knock out an electron making it a +4 Fe. The Fe+4 in the lattice absorbs certain wavelengths of light creating the purple color of amethyst.

But why amethyst? I can see the purple color reminding people of grapes and some varieties of wine, but is there something more? Turns out there is:

The Greek word "amethystos" can actually be translated as "not drunken" or "not intoxicated". This is because the ancient Greeks believed that amethyst crystals themselves prevented people from getting drunk. This is also the reason many Greeks made wine goblets carved out of amethyst crystals.

One of the earliest records that we have of this is the poem by Asclepiades of Samos (born 320 BCE) Windflowers of Asklepiades:


"Drunkenness am I - a gem worked by a subtle hand. I am graven in amethyst, and the subject and the stone are ill-sorted.But I am the precious property of Kleopatra, and on the finger of a Queen even "drunkenness" should be sober.*

(*a play on words since amethyst means not drunkenness)"

Another early example is an epigram by Plato the Younger found in The Greek Anthology:


"The stone is an Amethyst; but I, the tippler Bacchus, say- 'Let it either persuade me to be sober; or let it learn to get drunk."


One last example from Asclepiades also in The Greek Anthology:


"I am Drunkenness, the carving of a clever hand; but I am carved upon an Amethyst. Now the stone is alien to the art. But I am the holy possession of Cleopatra. For on the hand of a queen it behoves even a goddess, when drunk, to become sober." 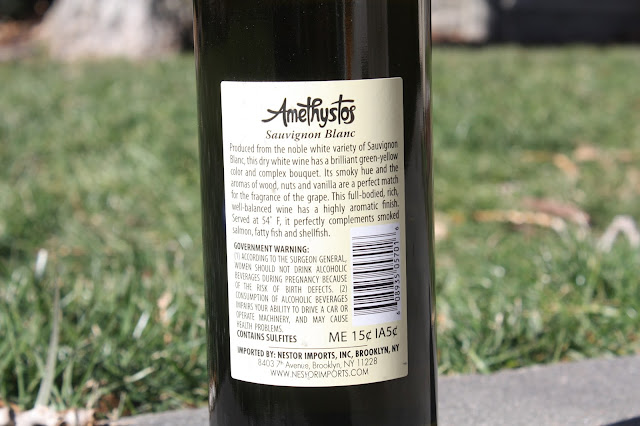 
"Produced from the noble white variety of Sauvignon Blanc, this dry white wine has a brilliant green-yellow color and complex bouquet. Its smoky hue and the aromas of wood, nuts and vanilla are a perfect match for the fragrance of the grape. This full-bodied, rich, well-balanced wine has a highly aromatic finish. Served at 54° F, it perfectly complements smoked salmon, fatty fish and shellfish." 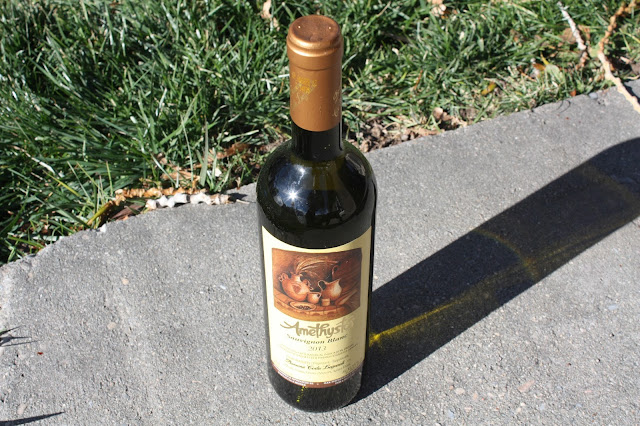