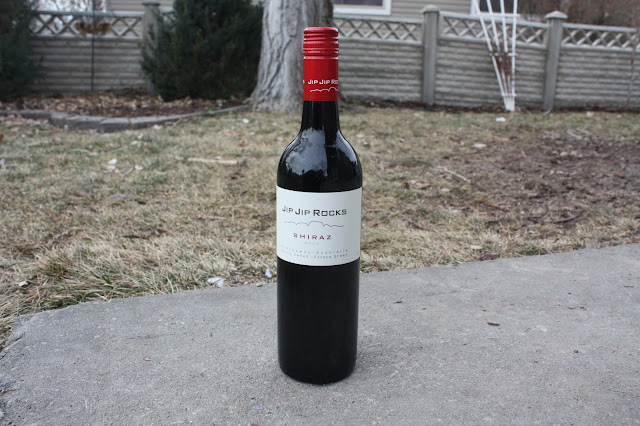 
"The Jip Jip Rocks are a striking outcrop of 350 million year old pink-red granite in the heart of the Padthaway region, which are sacred in traditional Aboriginal beliefs.

Jip Jip Rocks Shiraz is the essence of Australian Wine, embodying a pioneering spirit built from youthful enthusiasm and a lot of vineyard character.

Family owned and operated, Jip Jip Rocks is as independent as we are remote

The wines we make express the best of the Padthaway region, where not only the ancient soils, but also the maritime climate are ideal for growing grapes, particularly our beloved Shiraz.

Jip Jip Rocks is a bottle of serious fun and a great cellaring proposition, however we believe this shiraz is approachable now more so when shared with food, friends and conversation." 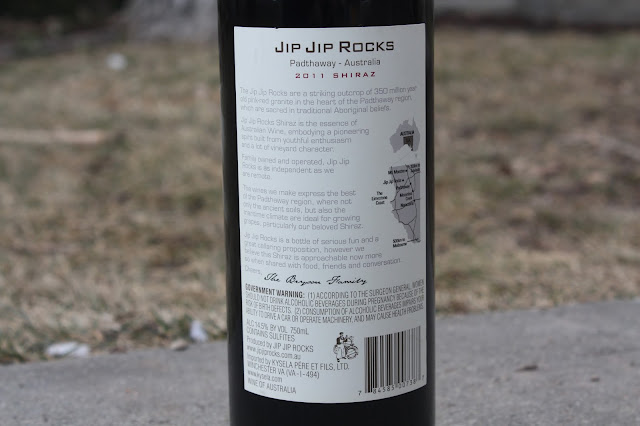 However, contrary to what the bottle states, there are no "Jip Jip Rocks" in a geological sense. The rocks that are identified as the "Jip Jip Rocks" aren't actually a named geological unit (as far as I can tell). You can see the Jip Jip Rocks through Google aerial imagery. They are located within the Jip Jip Conservation Park.
The rock unit within the Jip Jip Conservation Park is currently identified as "Granite 37500". They are Cambrian age (~520 million year old), instrusive igneous rocks. These are far older than the "350 million years" listed on the back of the bottle. The granites formed from magma deep within the Earth's surface and slowly cooled over time. Eventually the area was uplifted and the overlying rocks were eroded away, exposing the granite to the surface. Although I can't find much information on the granite, it is clearly pink to red in color, as can be seen in the picture below and can be found in little isolated blobs throughout the region.
The Jip Jip Conservation Park is located within an area known as the Limestone Coast, an area of 400 km long along the southern shore of the South Australian region of the country. This area was under water up until around 2 million years ago, with limestone deposits across the region from that time undersea.