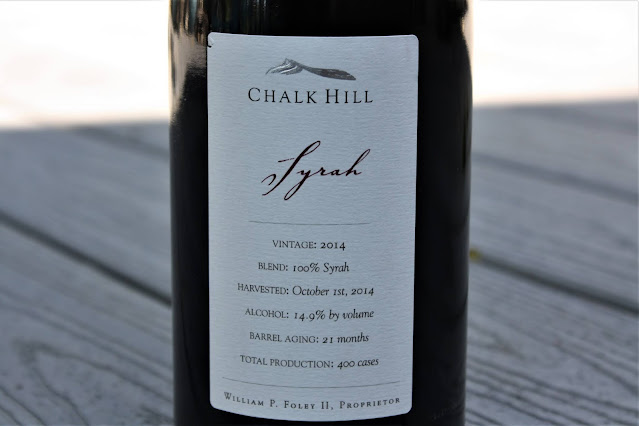 The next Drunk on Geology is for Chalk Hill Syrah from the Chalk Hill Estate Winery. 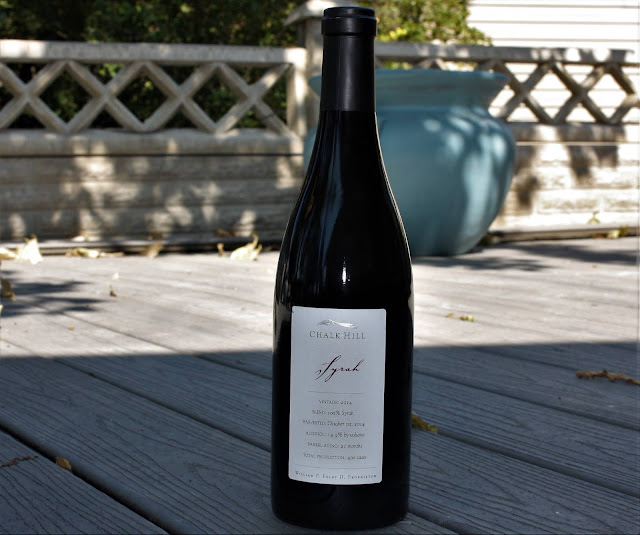 The name of the Chalk Hill Estate Winery comes from Chalk Hill upon which it sits, but the winery encompasses a rather large area with several different types of soil and bedrock. From their own website:

"In amazing proximity, the soils range from shallow to deep, from thin to thick, from gravel and rock to heavy clay. An old river bed caps one hill; an unusual serpentine vein ranges through another and, under the topsoil, is a distinctive layer of chalk-colored volcanic ash which inspired the name of Chalk Hill, the appellation, and the estate."

Their description of the winery is geologically fantastic, so lets take a closer look at the actual geologic map of the region.
The winery is located within the red circle on the geologic map above. This region, and the surrounding area, is a mishmash of geology. Starting with the purple unit that crosses the middle of the red circle, we have the serpentine vein that is mentioned in the description.

Although identified by the winery as "unusual", the serpentine band is actually part of a Middle Jurassic formation known as an ophiolite, of which ophiolites are fairly common across California. This is because of how California formed. The diagram below illustrates the subduction zone that was formerly off the western coast of California.
The crust of the Earth is made up of plates that move around and a subduction zone is when one plate goes beneath the another plate. When that occurs, a lot of things happen. As the plate descends, it starts to melt. That melted rock then rises back up producing volcanoes, in this instance it is how the Sierra Nevada mountains formed. But as that plate is descending, the overriding plate (in this instance North America) is scraping the top layer of the down-going plate (the Farallon Plate). The scraped material includes any islands in the ocean, other land masses, and even pieces of oceanic crust. This material is known collectively as "accreted terrane", and is how a vast portion of California was built up over time.
Looking at the pieces of the oceanic crust in particular, as the oceanic crust is formed, it is created at the Mid Ocean Ridge (as seen on the diagram above), by a series of continuous volcanic eruptions. These volcanic eruptions produce layers of different rocks and minerals depending on how the eruption interacts with the other rocks and water in the area. This eventually creates a layer-cake of rocks that are known as an Ophiolite Sequence.
One of the lowermost levels of an ophiolite sequence is the Serpentinite layer. The serpentinite is formed from the hydrothermal (hot water) metamorphism of mantle rocks, producing these green mineral rich rocks (most frequently comprised of antigorite, lizardite, and chrysotile) with a surface that looks similar to snake skin (hence the name).
One of the other main rock formations in the region of the winery is the KJgvs, which is part of the Jurassic-Cretaceous Great Valley complex. This particular series of rocks consists of interbedded sandstone, siltstone, and shale formed within the Great Valley forearc basin as seen in the subduction zone diagram above. These are non-marine rocks including river complexes across the valley. 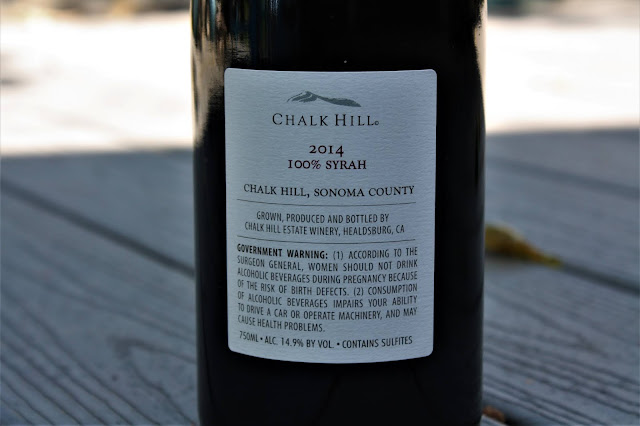 Most of the rocks within this region, however, are part of the Sonoma Volcanics,  including the Tsb rock, which is a basalt. According to the USGS:

The Sonoma volcanics constitute a thick and highly variable series of continental volcanic rocks, including andesite, basalt, and minor rhyolite flows and interbedded coarse- to fine-grained pyroclastic tuff and breccia, redeposited tuff and pumice, and diatomaceous mud, silt, and sand. A prominent body of rhyolite flows and tuff with some obsidian and perlitic glass called the St. Helena rhyolite member, occurs in the upper part.

The final location we will talk about would the the eponymous Chalk Hill. Chalk Hill is to the east of the winery with the winery sitting near its base along the Chalk Hill road (as near as I can tell). And as the Chalk Hill Winery website describes, Chalk Hill is indeed not made up of chalk. Chalk is a well known sedimentary rock, most famously found as the White Cliffs of Dover. Chalk itself is made up of tiny fossils of animals called coccolithophores. The microscopic animals form a ball covered in little calcium carbonate plates called coccoliths. When the animal dies, the plates come apart and if enough of the animals are present in the environment, they can accumulated over time to form the rock known as chalk, which is a white to grey colored chalky rock.
However, that is not what we have here. We have a rock that resembles the color and texture of chalk, but is not actual chalk. This rock is made up of ash and other pyroclastic deposits from the nearby volcanic zones produced from the subduction zone that continued off to the west. Ash, also a white to grey chalky rock, has a strong resemblance to chalk, hence the name of the region and the hill. When ash falls, it quickly hardens and produces a rock layer known as tuff. Although the term tuff can refer to any pyroclastic (volcano produced) rocks. The tuff of Chalk Hill was deposited mostly within water bodies in the region as part of the Sonoma Volcanics. These ash deposits have been dated to ~4 to 5 million years ago.
References
Arenas, Ricardo & Catalán, J.R. & Martínez, Sonia & García, Florentino & Abati, Jacobo & Fernández-Suárez, J. & Andonaegui, P. & Gómez Barreiro, Juan. (2007). Paleozoic ophiolites in the Variscan suture of Galicia (northwest Spain): Distribution, characteristics and meaning. 10.1130/2007.1200(22).
https://pubs.usgs.gov/wsp/1495/report.pdf
https://www.nps.gov/subjects/geology/plate-tectonics-subduction-zones.htm
https://ngmdb.usgs.gov/Prodesc/proddesc_52762.htm
https://pubs.geoscienceworld.org/gsa/geosphere/article/8/2/342/132533/Evolution-of-the-Rodgers-Creek-Maacama-right
at January 12, 2021