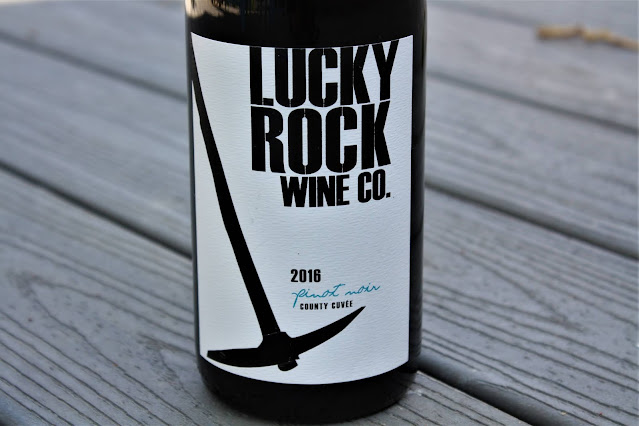 The next Drunk on Geology is for Lucky Rock Pinot Noir from the Lucky Rock Wine Co.

A "Lucky Rock" is gold or a rock containing gold, as mentioned on the Lucky Rock Wine Co.'s website. The chemical symbol for gold is Au, and gold is one of the unique minerals that, in its pure form, is composed entirely of one element. It has a hardness of 2.5 to 3 on the Mohs hardness scale meaning that it actually is very soft (your fingernail is 2.5). For this reason most gold jewelry is mixed with another metal to prevent scratching and bending easily. The karat rating of the gold represents it's purity, where 24 karat is 99.9% pure, 22 karat 91.7%, 18 karat 75%, and so on. Gold naturally does not corrode or tarnish, so even when it is mixed with other metals it usually has a resistance to tarnishing, enhancing its value for jewelry. When gold is found in place, the highest grade of gold is often found in association with quartz veins. Currently gold is considered one of the most valuable metals on Earth, being used as the standard for most money (gold standard).
Gold is often formed initially in relation to volcanic regions, where fluids associated with volcanoes carry the heavy metals up towards the surface and deposit them in rocks. These are found in areas of current or former subduction zones, places where two plates came together forcing one place down and melting it, while the other plate is forced upwards into mountains. Afterwards, erosion will take the gold out of the mountains and carry them down stream. However, since gold is so dense it does not travel easily down rivers and will often settle to the bottom of the river within the rocks and mud within the river sediment. These gold deposits are known as placer deposits and are the primary place where gold panners find gold. They can then use the locations of these placer deposits to backtrack to the original sources of the gold within the streams. 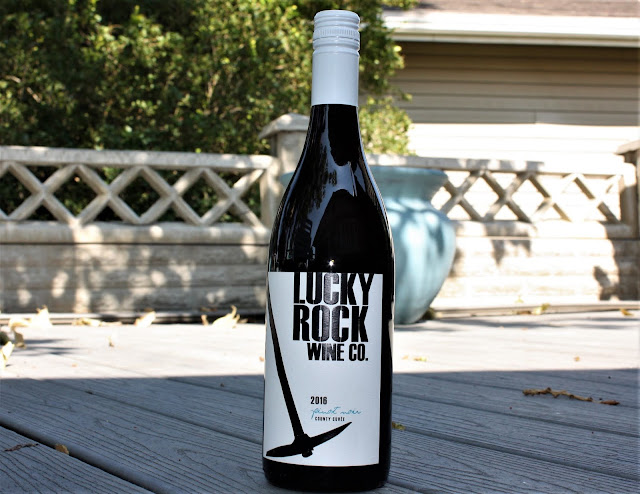 The website also mentions that "Lucky Rock Wine Co., (is) named after one of the more memorable mines they grew up at." So I decided to send them a message to see if I could find out a little more information. This is what one of the owners of Lucky Rock sent back:

"My dad started prospecting and mining in the early 80's in Siskiyou County. He and a partner filed claims for two mines in the Klamath National Forest around 1984 - the hard rock mine was called Lucky Rock. In addition, my dad and a partner sourced funding for their mining efforts and eventually had several investors from Southern California. The company was named Lucky Rock Mining Company and operated for a few years. The "Lucky Rock" mine was just outside Seiad Valley." 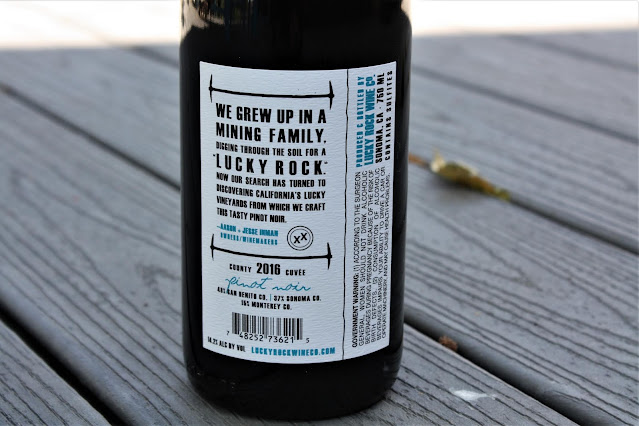 "We grew up in a mining family, digging through the soil for a "Lucky Rock." Now our search has turned to discovering California's lucky vineyards from which we craft this tasty Pinot Noir."

With this information I was easily able to find the Lucky Rock mining claims.
And as usual, let's take a look at the geologic map of that region, just to get a handle of what we are looking at.
The dominant geological features of this region are by far the Slinkard Pluton, identified as unit Mzd, and the blue unit listed as MzPz towards the north of that. On that specific map Mzd is identified as Dioritic Plutonic rocks and MzPz is some Mesozoic and Paleozoic undifferentiated metamorphoric basement rocks. The Slinkard Pluton however is the major producer of the gold identified within the region. A pluton is a igneous body that formed from the cooling of a body of magma below the Earth's surface.
Off the west coast of northern California, as well as Oregon and Washington, is what is known as a subduction zone. In a subduction zone one plate goes beneath the other. As the one plate sinks down, it starts to heat up and melt. That melted plate then rises up and forms a line of volcanoes.

Along the western edge of northern California is the subduction of the Gorda Plate, which is the remnant of the much larger Farallon Plate that used to be subduction along the entire Californian coast. 162 million years ago, during the Late Jurassic, the melted portions of the Gorda Plate produced the Slinkard Pluton as well as the related Wooley Creek batholith (which is a much larger pluton). 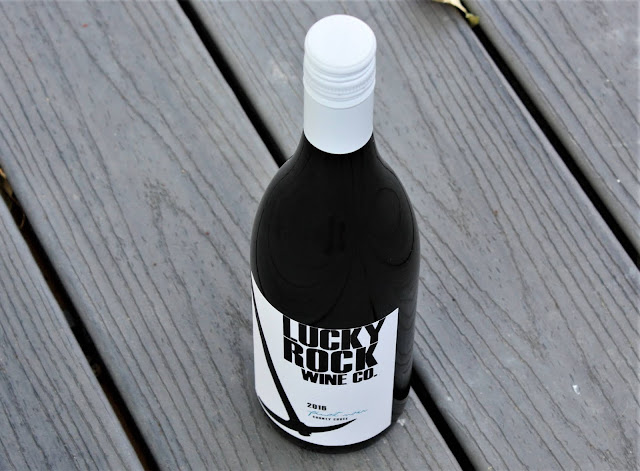 As the magma body was cooling, the heat from the magma also heated up the surrounding groundwater. This groundwater, as it was heated rose to the surface, cooled, and descended back down to the magma body, creating a cycle. As the hydrothermal fluids moved from the magma towards the surface and through the surrounding rocks, they moved the heavy metals (such as gold, copper, silver, etc.) from within the magma and redeposit them within the surrounding landscape. Over time the gold would weather out of the surrounding landscape and get transported within neighboring streams and rivers. But due to the density of gold, it would often sit at the bottom of streams until a strong enough current came along to move it further along. These deposits, known as placer deposits, are what the Lucky Rock Mining Co. was searching for.