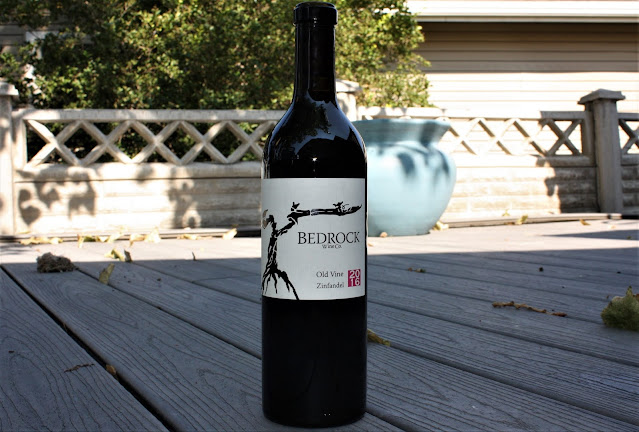 The next Drunk on Geology is for Bedrock Old Vine Zinfandel by the Bedrock Wine Company.

Although I am pretty certain that the owners of the winery chose to use the term "bedrock", with the less geological definition of the word as the foundation of their winery, that is not the way a geologist would see it. And I see it, as a geologist would see it. Bedrock Wine Company also has a large number of vineyards, however only one bear's the name "Bedrock" so we are going to focus on that one.
Bedrock definition (courtesy of the Dictionary of Geological Terms 3rd Ed.):

The solid rock that underlies gravel, soil, or other superficial material. 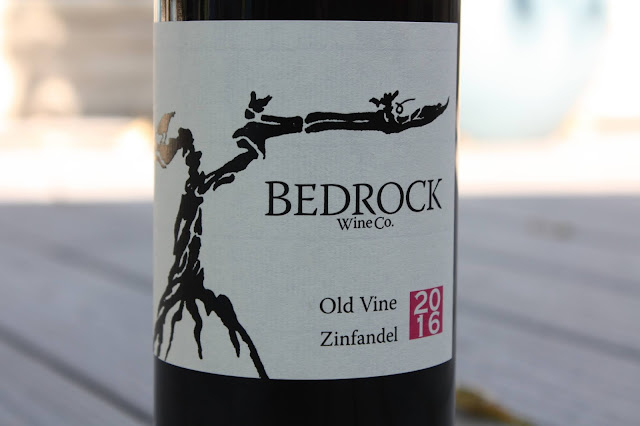 The problem with determining the bedrock of a region, especially an area within a river valley, such as where the Bedrock Vineyards are located, is that the overlying gravel, soil, and other superficial materials are frequently what is published on geological maps. And that is the case here, so we need to infer what indeed is the bedrock beneath the superficial materials. There are sometimes geologic bedrock maps made which interpret what would be the bedrock below the superficial deposits, however I couldn't find one for this region. This map is also a fairly recent map (2017), so I am fairly confident that we can use it to determine the likely bedrock below the sediment.
The red circle on the map above denotes the area of the Bedrock vineyards. As you can see there is a lot of geologic deposits where the only capital letter is a "Q". The "Q" stands for the Quaternary, the time period they were deposited during and these are the superficial deposits as mentioned above. The Quaternary represents the last ~2.5 million years in the Earth's geological history and runs up to today. These are mostly sediment deposited by the Sonoma Creek that runs down the middle of the valley.
In order to determine the bedrock from a map like this we need to first look at the bedrock along the outside edges of the stream valley deposits. These are going to be the sediments that begin with capitol letters besides just "Q". You can determine what all of these abbreviations by looking at the original map and legend HERE. 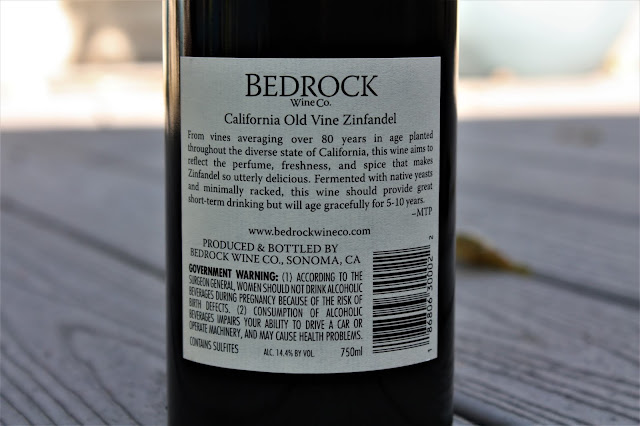 "From vines averaging over 80 years in age planted throughout the diverse state of California, this wine aims to reflect the perfume, freshness, and spice that makes Zinfandel so utterly delicious. Fermented with native yeasts and minimally racked, this wine should provide great short-term drinking but will age gracefully for 5-10 years."

The most notable rock formations are QPge, PMpu, Msvrah, and Msvas. Since QPge spans both sides of the river sediments, I am inclined to believe that this is the most likely bedrock directly below the winery. Even though I said that the deposits starting with a "Q" represented overlying sediment, there is also a capitol "P" on these. The "P" indicates that the unit spans more than just the Quaternary.
The QPge represents the Glen Ellen Formation. The Glen Ellen Formation is a unit comprised of a mixture of tuffaceous clay, mud, bouldery to pebbly gravel, and sand and silt deposits with interbedded conglomerates. These sediments were deposited in a variety of nonmarine environments, including coalescing alluvial fans, fan deltas, streams, and lakes (per Sweetkind et al., 2010). The Glen Ellen formation is Pliocene to Pleistocene in age and is identified as younger than 3.2 million years old. These rocks were likely deposited in a prehistoric version of the Sonoma Creek in which is currently found in the valley now. 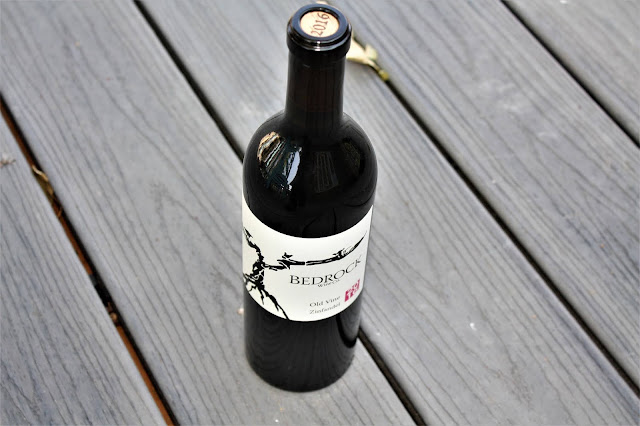 The PMpu is the Pliocene-Miocene age Upper Petaluma Formation. The Petaluma Formation is dominated by deposits of moderately to weakly consolidated silty to clayey mudstone, with local beds and lenses of poorly sorted sandstone. The environment in which these rocks were deposited consists of transitional marine and nonmarine sediments that were deposited in estuarine, lacustrine, and fluvial depositional settings (per Sweetkind et al., 2010). These rocks represent a much higher sea level than the Glen Ellen Formation, with a mixture of marine and nonmarine rocks deposited within the valley.
Msvrah (?Rhyolite of Adobe Canyon) and Msvas (Andesite of Shocken Hill) are both a part of the Sonoma Volcanics. The Sonoma Volcanics were deposited across a long range of time from the Miocene through the Pliocene and are described by the USGS as:

"... a thick and highly variable series of continental volcanic rocks, including andesite, basalt, and minor rhyolite flows and interbedded coarse- to fine-grained pyroclastic tuff and breccia, redeposited tuff and pumice, and diatomaceous mud, silt, and sand."

So overall, it is likely the bedrock for the Bedrock Vineyard is the Glen Ellen Formation, however the Upper Petaluma Formation is also likely. These are likely sprinkled with local volcanic deposits from the Sonoma Volcanics as well.