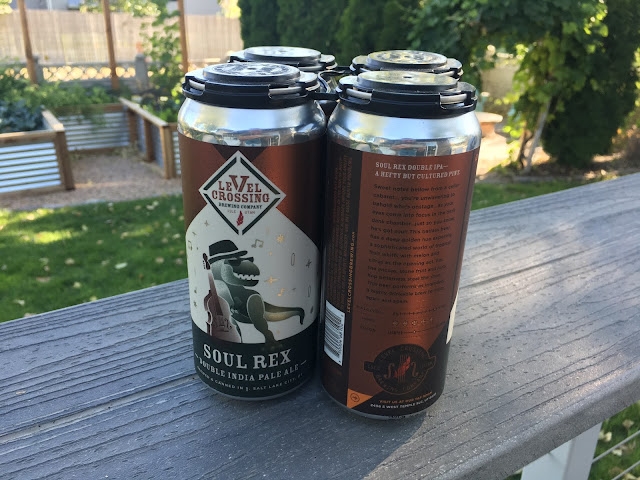 The next Drunk on Geology post is for Soul Rex Double IPA by Level Crossing Brewing Company out of Salt Lake City, UT.

The Soul Rex is clearly an homage to one of the mightiest of dinosaurs, the Tyrannosaurus rex. As pictured on the can, the logo presents a stylized version of the T. rex in shades, a jazz type hat, and holding a bass. I had previously done a couple of T. rex inspired beers before for the Pseudo Sue Pale Ale and the Tooth and Claw Dry Hopped Lager. Both of those beers focused on one specific T. rex skeleton, SUE, located at Chicago's Field Museum. So for this one I will look at the T. rex in general. 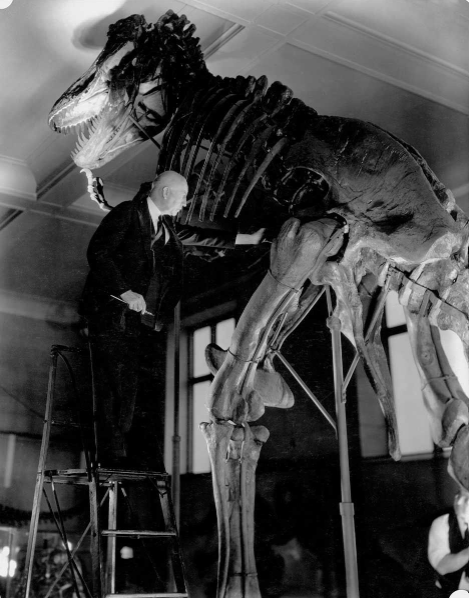 The first Tyrannosaurus rex skeleton was discovered in 1902 by Barnum Brown, the then assistant curator for the Department of Vertebrate Paleontology at the American Museum of Natural History (AMNH) in New York. The bones, discovered in the Hell Creek Formation near Hell Creek, Montana, were identified by a local land owner who then told Brown. The skeleton, only 10% complete, took 3 years to excavate and was then transported to the AMNH where the paleontology curator of the museum, Henry Fairfield Osborn, named the fossil in 1905 Tyrannosaurus rex, meaning "Tyrant Lizard King". 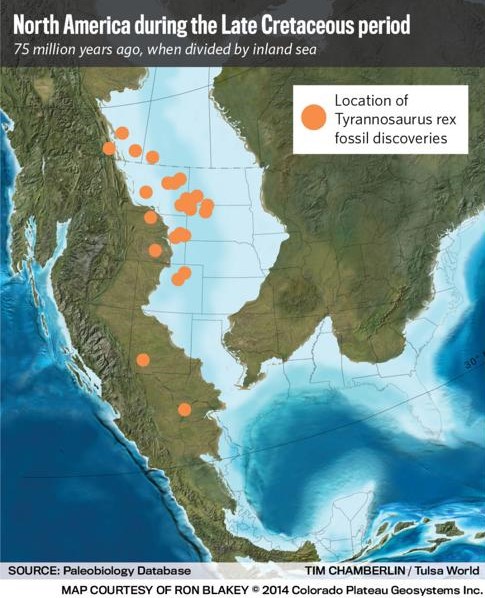 All fossils of the T. rex have since been found in western North America, ranging from southern Canada down into southern New Mexico and Texas. The T. rex was also one of the last living non-avian dinosaurs, having lived during the late Cretaceous period from about 68 to 66 million years ago, which is when the meteorite struck the Earth, wiping out those non-avian dinosaurs. 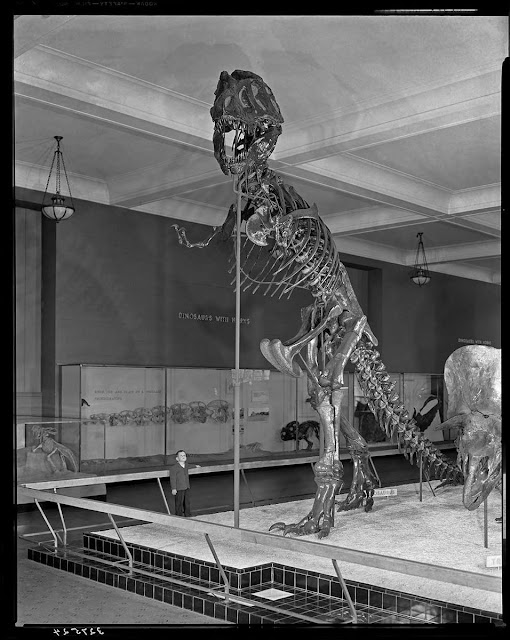 Although the skeleton discovered initially by Brown was only a partial skeleton, an even more complete skeleton was discovered by Brown 6 years later that became the basis for the skeleton seen above, mounted at the AMNH. It is this mount that went on to influence pop-culture for most of the next hundred years, where the T. rex was almost always portrayed in a vertical pose. Unfortunately this pose was set up mostly because of the steel armature could not do a more dynamic pose. Many of the tail vertebrae even needed to be broken in order to get the T. rex to be standing like this. 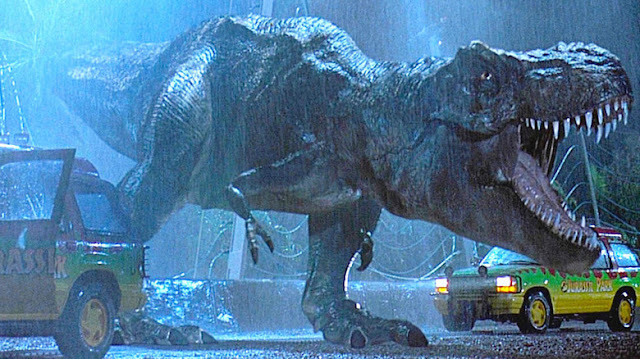 It wasn't until 1993's Jurassic Park, that movie and tv makers really started to take a look at the advancing science behind the dinosaurs and adjusted their models accordingly. For the movie, the T. rex is presented in a much more accurate model, where the body of the beast is balanced over the legs, with the tail acting as a counterweight, forming a giant see-saw. This remodeled T. rex also gives us a much more accurate depiction of its size, where an adult can grow up to ~12 feet tall at the hip and ~40 feet long from tip of the tail to snout. But one of the most notable features of a T. rex were its teeth, that ranged in size up to 12 inches long, which included the root, still leaving approximately a 6 inch tooth exposed. 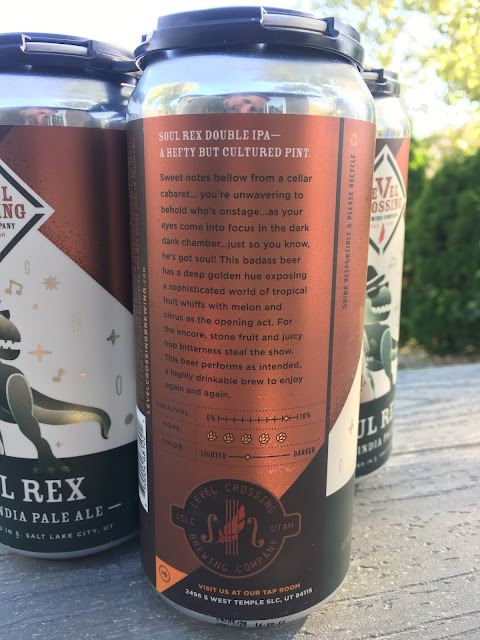 Text from the back of the can:

Soul Rex Double IPA - A hefty but cultured pint. Sweet notes bellow from a cellar cabaret... you're unwavering to behold who's onstage... as your eyes come into focus in the dark dank chamber... just so you know, he's got soul! This badass beer has a deep golden hue exposing a sophisticated world of tropical fruit whiffs with melon and citrus as the opening act. For the encore, stone fruit and juicy hop bitterness steal the show. This beet performs as intended, a highly drinkable brew to enjoy again and again. 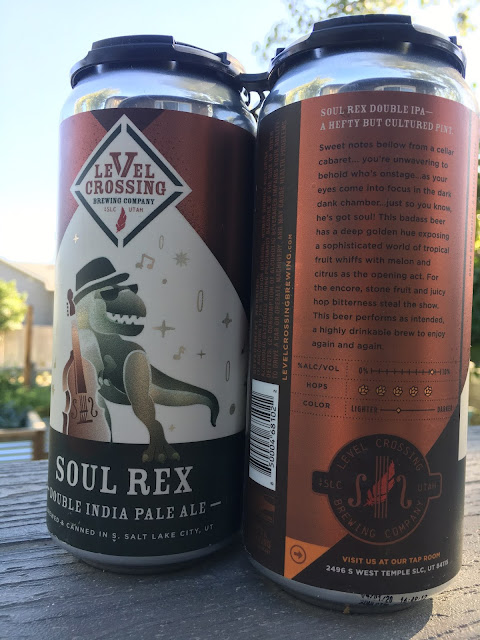 Since the release of Jurassic Park, the science of T. rex has continued to advance. With the discovery that birds are descendants of dinosaurs, and many dinosaurs discovered with feathers, it is now believed that even the T. rex likely sported some variety of plumage, although it is currently unclear how much plumage a T. rex  may have had at any given point in its life. 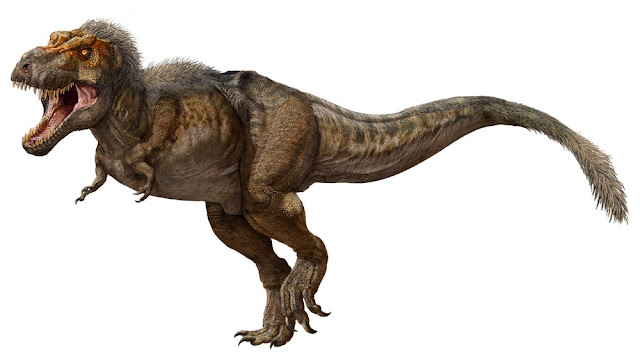 It is unclear how much this current model of the T. rex will change as more fossils are discovered and analyzed, but as one of the most famous dinosaurs, there are sure to be many people hunting for the next big breakthrough. Will those future discoveries include that T. rexes liked to hang out in jazz clubs and play the bass? The world may never know.
References
https://www.fossilguy.com/gallery/vert/dinosaur/tyrannosaurus/trex-discovery.htm
https://www.smithsonianmag.com/science-nature/barnum-brown-the-man-who-discovered-tyrannosaurus-rex-70758588/
https://www.amnh.org/dinosaurs/tyrannosaurus-rex
https://www.mentalfloss.com/article/606903/how-t-rex-american-museum-natural-history-became-icon
https://www.businessinsider.com/t-rex-discoveries-hunted-walked-growth-2021-4
https://tulsaworld.com/location-of-t-rex-fossil-discoveries/image_e1f73009-69c9-5b57-87b8-f616d47a9950.html
at November 17, 2021