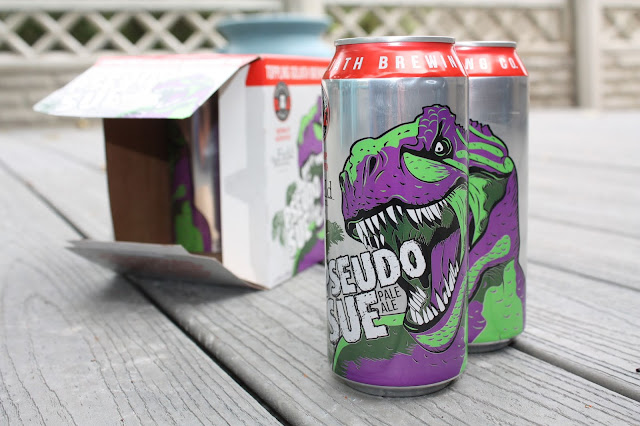 The next Drunk on Geology is for Pseudo Sue Pale Ale by Toppling Goliath Brewing Company.

My case of Pseudo Sue was sent to me by some Chicago based friends who knew that I am big into the geology and paleontology of beers and figured this would be perfect for me.
SUE (AKA FMNH PR 2081) is the Chicago Field Museum's Tyrannosaurus rex.
There is a lot that can be said about SUE, but in short she was a 90% complete T. rex skeleton, which is one of the most complete T. rexes ever found. The Black Hills Institute of South Dakota was the organization that found her but there was some legal issues that came with the discovery. I go into it a bit more on my other blog, but I don't want to rehash that here. Eventually, the fossil was sold for $8.36 million to the Chicago Field Museum with backing by McDonalds and the Walt Disney Company.
. 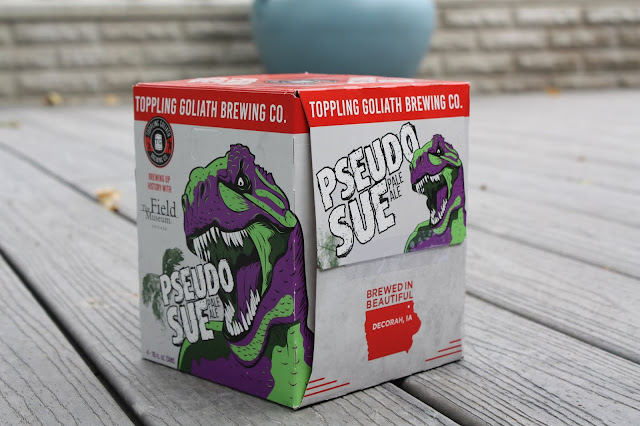 There are a few T. rex focused alcohols out there, and even two that are specifically about SUE, so for this post I am going to focus on the recreation of SUE on the package. Here SUE is pictured in bright greens and purples, however this same design has been used other times by the brewery with different color combinations. That brings up the question, of what is the correct color of a T. rex? 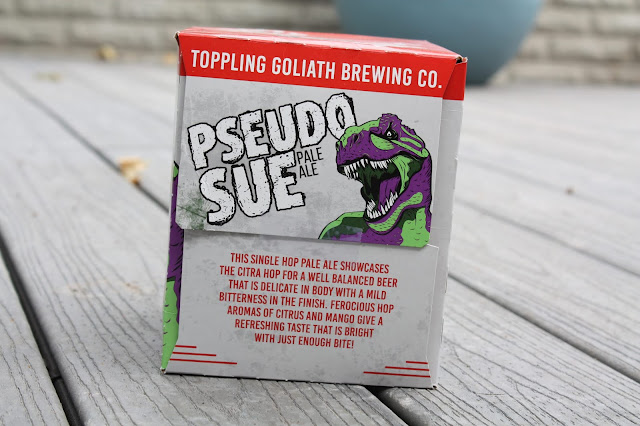 Text from the box:

"This single-hop pale ale showcases the Citra hop for a well-balanced beer that is delicate in body with a mild bitterness in the finish. She roars with ferocious aromas of grapefruit, citrus, mango and evergreen. Pseudo Sue’s unique taste is clean and bright with just enough bite!"

It has long been thought by paleontologists that we were never going to know what colors dinosaurs were. So they could, in theory, be any color possible. However, that is starting to change. Modern science has noted that many theropod dinosaurs likely had at least some feathers on them, unlike this depiction here, which is more akin to the original Jurassic Park's depiction of the Tyrant Lizard King.
So did T. rex have feathers? There is some controversy to this as well. There have been numerous finds of T. rex with skin impressions, which would indicate that at least some of the animal was not covered with feathers. But that doesn't mean all of the animal was uncovered, or even that baby T. rexes were featherless (of which recent studies indicate that baby tyrannosaurs were indeed feathered). So, even if the baby T. rex was feathered it doesn't mean that an adult was feathered. Or even that the adult was partially covered. It's impossible to tell unless scientists either find enough skin impressions to that there was definitely no feathers, or they find feathers associated with the skeleton. Until then, it is likely that a T. rex probably had at least some feathers in adulthood.
Putting the question of whether the T. rex was feathered or not aside, can scientists actually determine the color of dinosaurs (the extinct kind and the modern bird kind). And the answer to that is actually yes, at least up to a point. There are some colors in birds and other animals that are considered structural colors, meaning that the structure of the molecules within the body feature, such as a feather, affects its color. Therefore, it is possible to determine the color of the fossil feature (i.e. feathers) by looking at the structure of the melanosomes (color-bearing organelles) within the fossils. These organelles, which can be preserved in exceptional fossils, can then tell scientists what the colors of the feathers were (such as here, here, and here). While this doesn't represent all the possible colors that could be depicted, it does represent a wide array of the possible colors. 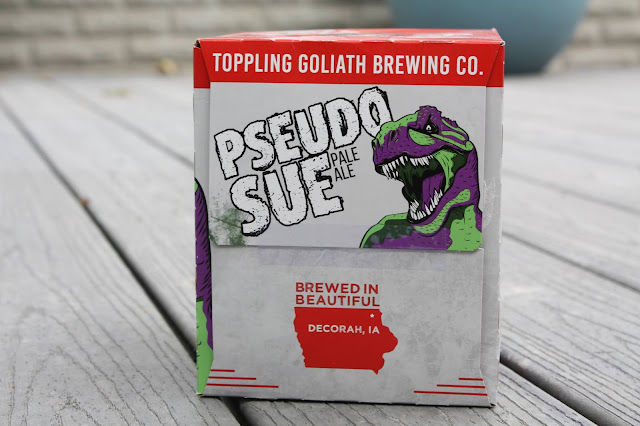 Skin color, on the other hand is a bit harder, however it is not unprecedented that scientists have determined some fossils skin colors. Again, these are generally in exceptionally well preserved fossils. Within these they have found carotenoid-based structural coloration of a 10 million year old snake and as stacked perforated laminae in moths.
Within dinosaurs, current knowledge is fairly rare of coloration outside of the feathers. However, recent research has determine some animal colors based on melanin within exceptionally preserved scales of dinosaurs such as Psittacosaurus (black and amber/brown) and Borealopelta (reddish brown). 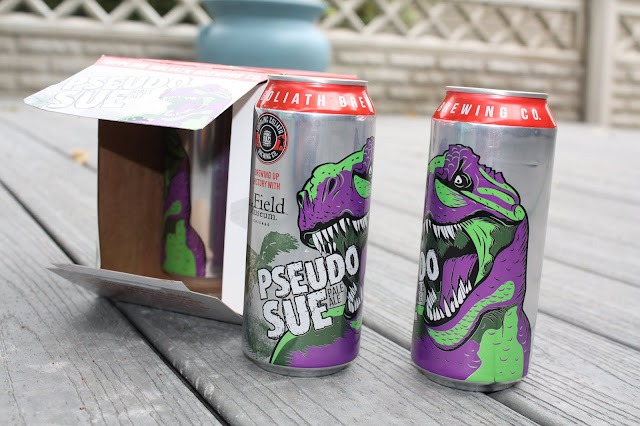 However, when we look as the fossil scale colors based on the melanin, the colors that show up are yellow, brown, and red. This is likely not the only colors that are possible, however these are the structural colors for melanin. There are other methods of producing colors that are not preserved in the fossil record as well.
We know that based on the modern day assemblage of birds, that they represent a wide array of colors. However, those colors are created by their plumage, not their skin tones. It is unknown if a T. rex could produce colors like this without a coat of feathers. But if it is determined that the T. rex does have some variety of feathers on it, it could potentially have a more vivid color scheme. So for now, the colors of the T. rex will remain a mystery.
at November 29, 2020