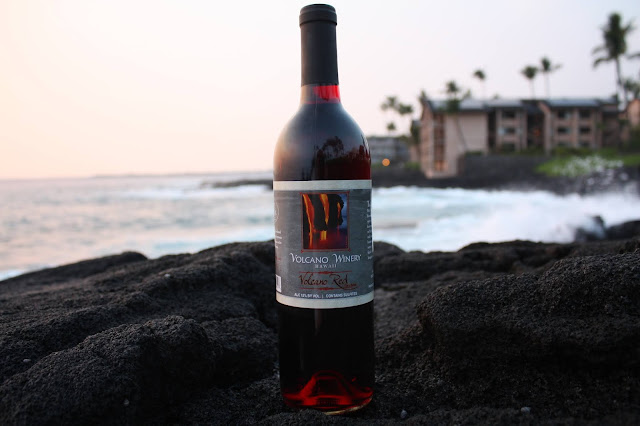 The next up in our Drunk on Geology series is the Volcano Red Pele's Delight from the Volcano Winery in Volcano, Hawaii. 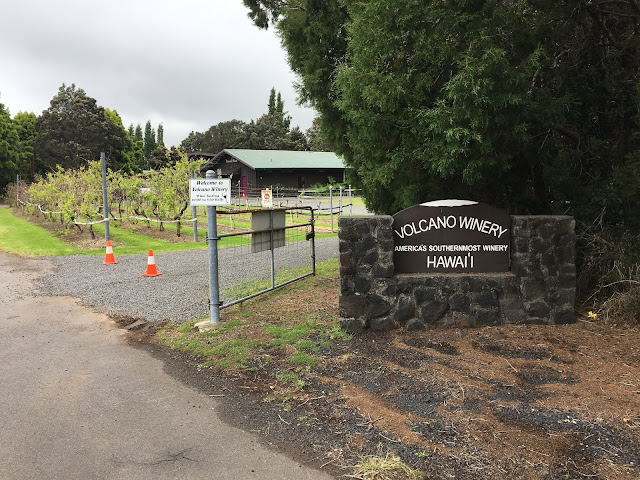 The Volcano Winery is in the town of Volcano on the Big Island of Hawaii. The town is just to the north of the main Hawai'i Volcanoes National Park. I had actually done a geological review of the national park earlier which you can find HERE.
Many people probably already know this, but the island of Hawai'i is an active volcano. All of the islands of Hawaii are actually volcanoes, with only the Big Island having active volcanoes on it. Hawaii is a special type of volcano known as a hotspot. A hotspot is a type of volcano that sits in one place as the crustal plate on the surface of the Earth rides over it. The source of the magma for a hotspot is an area known as a mantle plume. This spot is essentially "fixed" within the Earth and doesn't move while the plates on the Earth's surface are all moving around on top of it. As the plate moves, the Pacific Plate in this instance, over the hotspot, volcanoes pop up out of the sea floor. As the plate continues to move on, the old volcanoes are pulled away from the hotspot source and die off, while new volcanoes are created.
The hotspot is currently located on the eastern edge and a bit to the southeast of the Big Island. Off the southeastern shore a new island is actually currently being formed called Lō'ihi. In the future, Lō'ihi has the potential to become a new island or could possibly fuse with the Big Island, like several of the other volcanoes immediately in proximity to each other on the Big Island. On the Big Island there are actually five subaerial volcanoes, of which three are considered active (last erupted in the last 10,000 years): Kilauea, Mauna Loa, and Hualalai. The town of Volcano, where the winery is located, sits on the divide between Mauna Loa and Kilauea.
The winery itself is extremely close to the caldera of the Kilauea Volcano. A caldera is a volcanic feature that is kind of like a bowl. As the magma within the volcano erupts, the magma chamber ends up being an empty space within the ground. Frequently this empty space will collapse down upon itself, creating an indented area known as the caldera. The caldera forms around the primary vent or crater, which is the area where the magma leaves the magma chamber to the surface. Once magma erupts onto the surface, it is then considered lava. The Kilauea Caldera had active lava within it when we visited back in April of 2018 within the crater known as Halema'uma'u Crater (seen in the picture above). 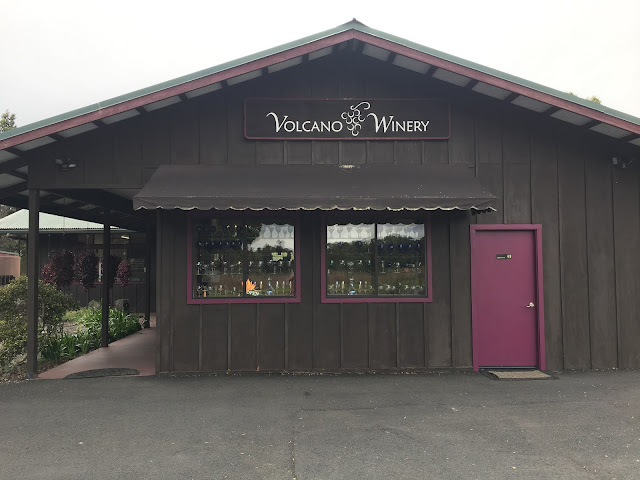 Here is the entrance of the Volcano Winery.

We were staying on the western shore of the Big Island south of Kona. The complex we were staying at had a bunch of lava flows from Hualalai Volcano that flowed out to the ocean that I thought was a perfect backdrop for the wine bottles that we got. 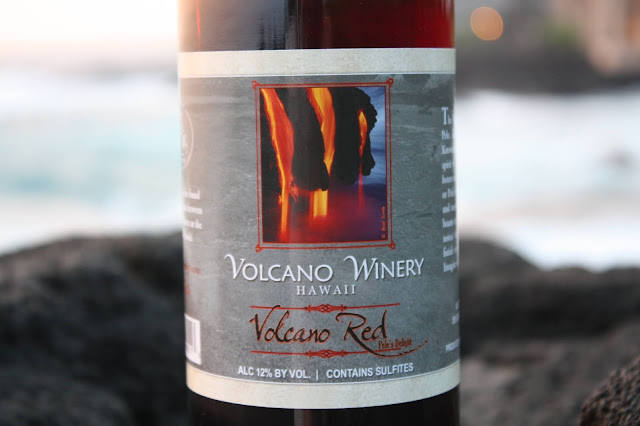 The Volcano Red depicts some active lava flows dripping into the ocean. Hawaiian lava is a type of lava known as basaltic. Basaltic lava is a fairly high temperature lava with a low silica content. Because of the higher temperatures and low silica content, this type of lava then has a low viscosity, meaning it flows very easily. On the opposite end of the spectrum is felsic lavas which have a high silica content, a lower temperature, and a high viscosity. The high viscosity lavas lead to volcanoes that are steep sided and tend to get plugged up by their own lava flows. These are type of volcanoes most people associate as a volcano, with its stereotypical conical shape. The felsic volcanoes also produce the more explosive eruptions, while the basaltic volcanoes, such as these on Hawaii, are rarely explosive and have a very low profile shape, termed a shield volcano. 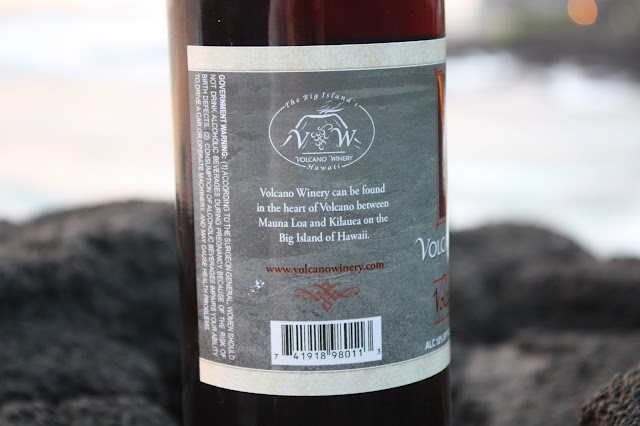 As I noted above here is the text on one side of the label:

"Volcano Winery can be found in the heart of Volcano between Mauna Loa and Kilauea on the Big Island of Hawaii."

The lava flows that I took the pictures on are a type of basaltic lava flows known as pahoehoe. These are smooth surfaced lava flows that often have a ropey texture. The other type of lava flows are known as a'a', which are very sharp and blocky and not recommended to walk on barefoot. 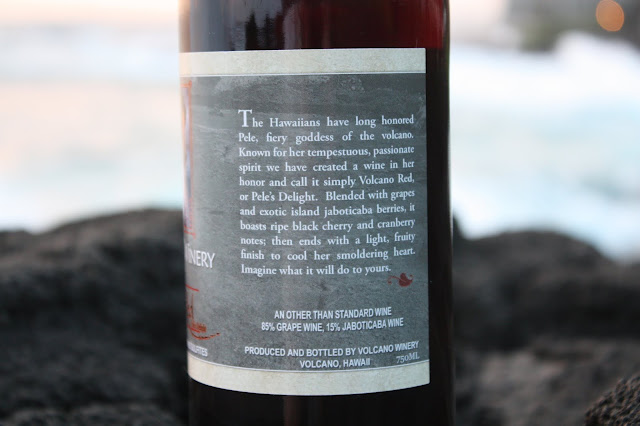 The other side of the label gives some more background on the wine name:

"The Hawaiians have long honored Pele, fiery goddess of the volcano. Known for her tempestuous, passionate spirit we have created a wine in her honor and call it simply Volcano Red, or Pele's Delight. Blended with grapes and exotic island jaboticaba berries, it boasts ripe black cherry and cranberry notes; then ends with a light, fruity finish to cool her smoldering heart. Imagine what it will do your." 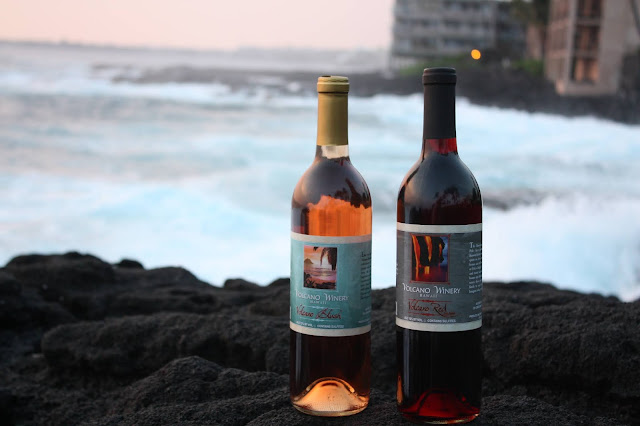 There are quite a few wines available from the winery, but the Volcano Red was the most obvious with the geological connection, but the wines themselves are all very lovely.
References
https://volcanowinery.com/
https://pubs.usgs.gov/of/2008/1192/of2008-1192.pdf
https://clarkscience8.weebly.com/hot-spots.html
at November 14, 2020