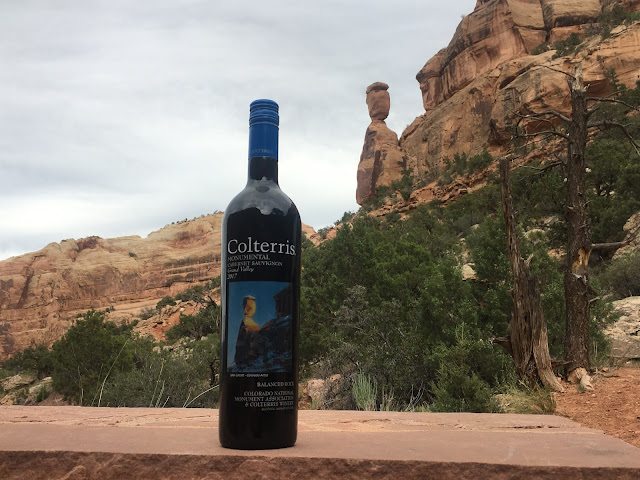 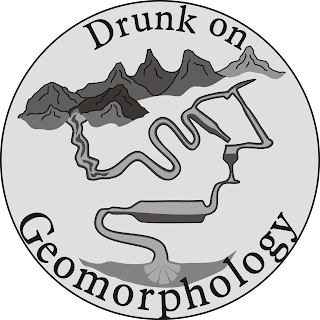 The next Drunk on Geology is for Colterris Monumental Cabernet Sauvignon from the Colterris Winery in Palisade, CO.

Colterris Monumental Cabernet Sauvignon features prominently the Balanced Rock of nearby Colorado National Monument. Balanced Rock, named on the bottle, is presented on the bottle by an absolutely striking picture of the rock being highlighted by, what I am assuming, is a sunrise. The picture is a painting by Colorado based artist John Lintott. 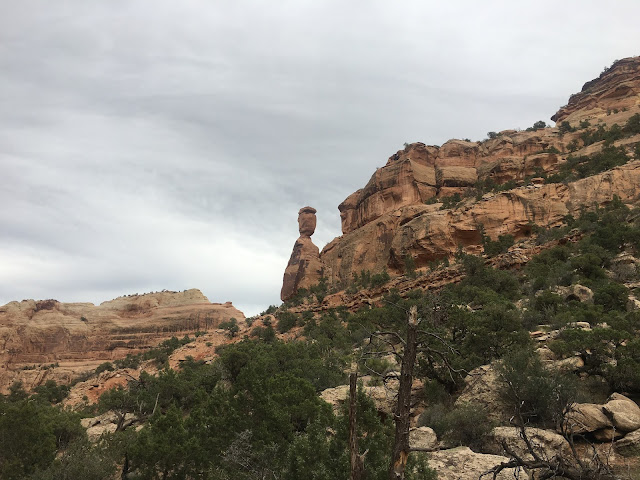 Balanced Rock is part of the Wingate Sandstone, the dominant rock formation within Colorado National Monument. The Wingate Sandstone is Early Jurassic (~200 million years old) in age and was formed from eolian sandstone. This means that these rocks were sand dunes that were once part of a desert (eolian meaning "wind blown"). The rock is made up of nearly entirely of quartz sand grains glued together with a mineral known as calcite, or calcium carbonate. The Wingate also includes some slight amounts of iron oxide, otherwise known as hematite, or rust, which gives the rock it's characteristic yellowish-red hue. 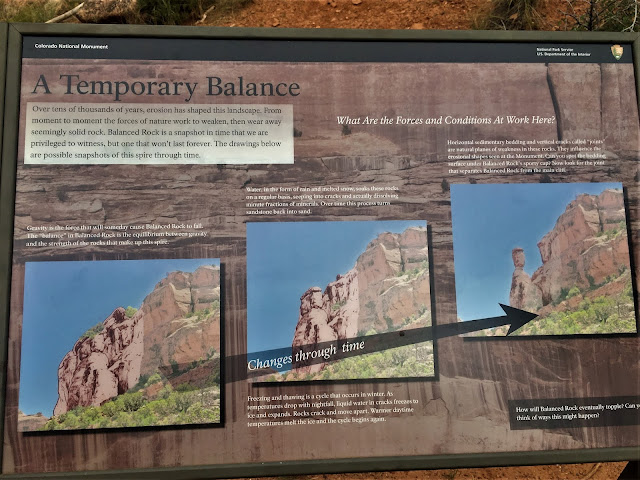 Over time, this formation was solidified from the sand dune into a sandstone. And then this sandstone was uplifted along with all of the other formations that lie both above and below it. These formations then started to undergo erosion, breaking down the rocks slowly over time through wind, water, dissolution of the cement, and frost action. Water works its way through natural joints, or fractures, in the rock. As the water works its way through the rock, it dissolves the calcite cement, much in the same way water dissolves the calcite of a cave. Then during the winter time, without the cement holding the rock together, the water freezes and expands, forcing the rock slightly apart. Over the course of many thousands and millions of years, that small degree of movement compounds and slowly the rock is broken up. Gravity then carries away the pieces broken off, slowly eating away at the cliff face. 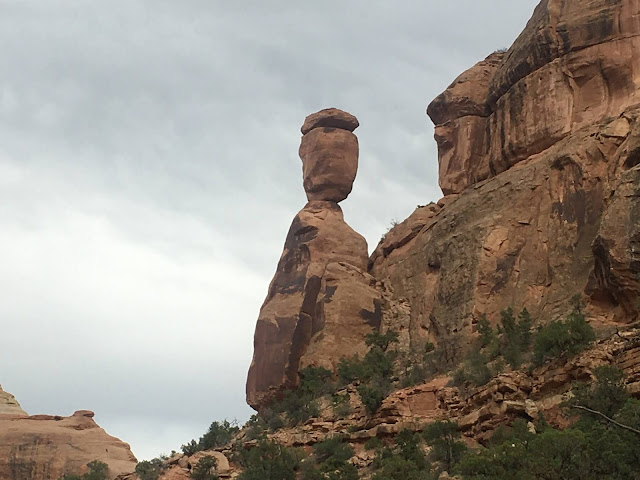 Differences in the bedding and joints in the formation preferentially direct the water into specific areas, creating isolated pieces of rock that withstand erosion better then other places. You can see the vertical joint along the right side of the rock that had preferentially been eroded, isolating the column of rock. This likely was sourced by water running off of the plateau that we can see the end of on the right hand side. With the separation of the Balanced Rock pillar from the plateau, water likely has more difficulty getting to the Balance Rock, and therefore prolongs its existence.
Weathering/erosion also attacked the bedding plane below the the Balance Rock, which eroded more than the overlying ball of rock. This same bedding plane can be traced back to the cliff face itself, where that same layer was also eroded more than the overlying rock. It is likely that those weaker areas of the rock also have higher amounts of erodable minerals like clay.
The question on the display asks the most pertinent question of "How will Balanced Rock eventually topple?" but they do make note to point out that Balanced Rock is a snapshot in time that we are privileged to be able to witness.
References
http://npshistory.com/publications/geology/bul/1229/sec1.htm
at November 14, 2021

Email ThisBlogThis!Share to TwitterShare to FacebookShare to Pinterest
Labels: Drunk on Geomorphology, Wine