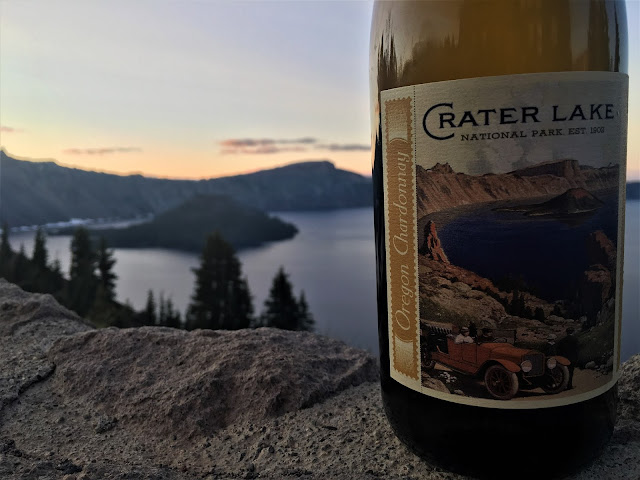 The next Drunk on Geology is for Crater Lake Oregon Chardonnay by Eola Hills Wine Cellars in Rickreall, Oregon. 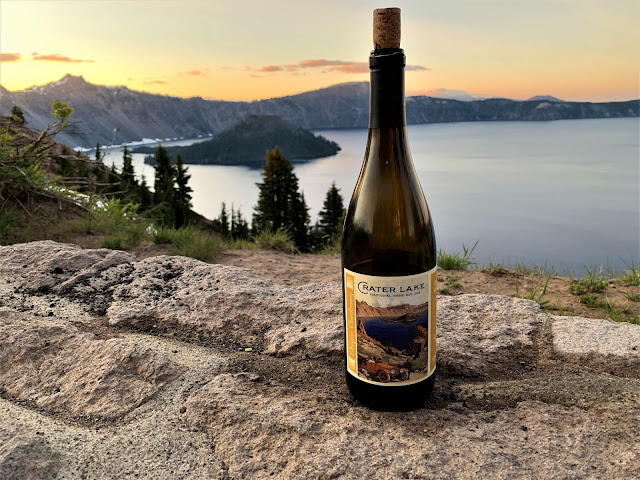 We had visited Crater Lake National Park over the summer of 2019 and we able to pick up this wine during dinner in the main lodge. Then afterwards I took some pictures out the back patio of the lodge overlooking the lake with Wizard Island in the background, matching the view on the bottle itself.
Crater Lake is a volcano located along the Cascade Range in the Pacific Northwest of the United States, which runs north into British Columbia in Canada. Crater Lake was originally a full blown volcano known as Mount Mazama, which was ~12,000 feet high before it erupted ~7,700 years ago.
These volcanoes formed from the process known as subduction where one of the Earth's crustal plates descends slowly below another plate. As the denser plate descends, it begins to melt. The melted rock then rises up through the crust creating a line of volcanoes known as a volcanic arc. Crater Lake is one of the volcanoes located along the Cascadian volcanic arc.
Mount Mazama, like Mount Tehama to the south that eventually eroded into Lassen Peak, was a composite volcano. There are lots of different types of volcanoes. A composite volcano is a volcano that is composed of  alternating layers of ash, lava flows, rock fragments, and cinders that slowly piled up over time from smaller eruptions. The primary type of magma in this volcano was the thicker magma, termed felsic, that has a higher silica and gaseous content than volcanoes in places like Hawaii. Felsic magma and lava has a tendency to flow slowly and also to clog up volcanic vents. This periodic clogging allows the volcano to build up pressure, both from the thick lava and the high gas content within the volcano. It is like a soda bottle being shaken before the cap is released. Around 7,700 years ago the cap was released, producing an enormous eruption that released ash, gas, rocks, and lava into the air and surrounding regions. Eventually the magma chamber mostly emptied, leaving a gaping void below the mountain peak, which collapsed in on itself. This formed a bowl shaped depression known as a caldera. Later, smaller eruptions sealed the caldera floor, allowing for water to accumulate over time.
Crater Lake is one of the few volcanic calderas that are fully isolated from the surrounding water environment. Water only leaves the lake through evaporation, and a small amount of seepage, while it only enters the lake through snow and rainfall, keeping the lake at a nice balance. The lack of streams into the lake has also nearly eliminated the sediment within the lake, producing a crystal clear lake that reflects the deep blue of the sky.
. 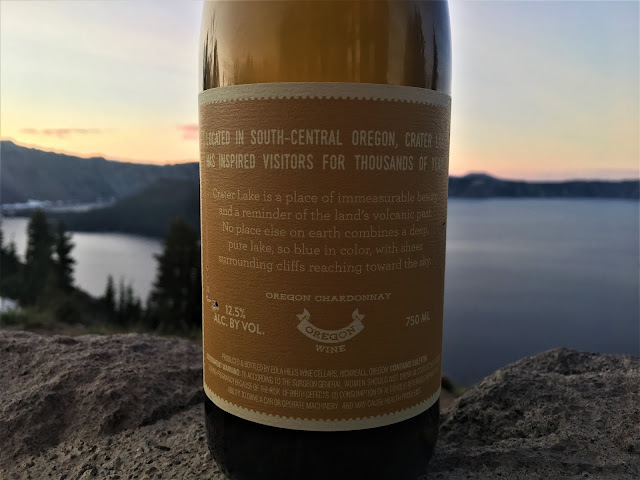 Located in South-Central Oregon, Crater Lake has inspired visitors for thousands of years.

Crate Lake is a place of immeasurable beauty and a reminder of the land's volcanic past. No place else on earth combines a deep, pure lake, so blue in color, with sheer surrounding cliffs reaching towards the sky.

Seen on the bottle label, as well as in the background of the photos, is Wizard Island, which is easily the largest island in the lake. Wizard Island was formed during the subsequent eruptions shortly after the formation of the caldera. Wizard Island is a cinder cone. A cinder cone is another type of volcano that is produced when lava splutters out of a volcanic vent. As the lava is spit into the air is cools and forms a type of rock that is usually smaller in size and has a lot of air holes called scoria. During the course of the eruption these small chunks of rock pile up around the volcanic vent and eventually pile up to form a cone. The cinder cone Wizard Island is over 700 feet high from the surface of the water.
at March 22, 2021