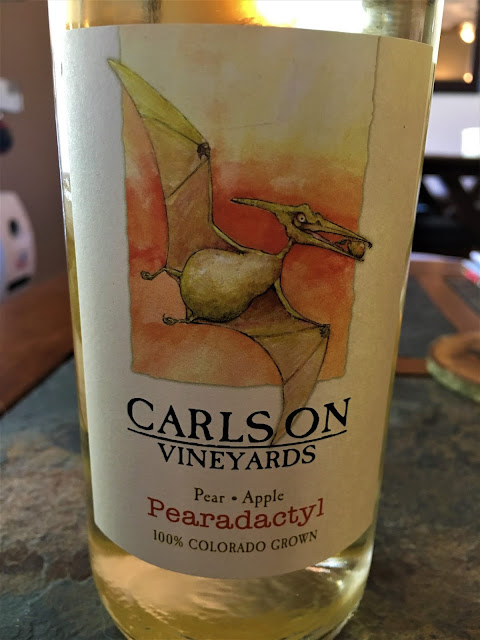 For my next Drunk on Geology we have Pearadactyl - Pear Apple Wine by the Carlson Vineyards in Palisade, Colorado.

Clearly named after the word Pterodactyl, the name of the wine takes advantage of the similar sounds between the the "Pter" (pronounced like tear) and the rhyming "pear". But the word Pterodactyl was first coined in 1809 by Georges Cuvier. This was based on a fossil of an unknown creature first identified in 1784 by Italian scientist Cosimo Collini, who though this must be a marine organism of some kind. Cuvier correctly discerned later that this was a flying animal and coined the phrase "Petro-dactyl" meaning "winged finger":

"On the fossil skeleton of a FLYING REPTILE from the environe of AICHSTEDT, which some naturalists have taken for a bird, and of which we form a genus of SAURIANS, under the name of PETRO-DACTYL."

A Latinized version of Cuvier's descriptive term for the animal was then used by Lorenz Oken in 1818 to name the animal with the official species name of Pterodactylus. Since that time, the term "pterodactyl" is not actually a scientifically valid name. The group of flying reptiles is collectively known as "pterosaurs", which are all the animals that belong to the taxonomic order Pterosauria. Within the order of Pterosauria, there are individual animals such as the Pterodactylus and the Pteranodon, but nothing that would be referred to simply as a "Pterodactyl".
But despite the misnomer, the name lives on, as anyone who has tried to Google the animal can attest to. Overall, pterosaurs are a group of flying reptiles. They are NOT dinosaurs, having branched off of the reptile family tree before dinosaurs had truly evolved. You can think of them as the cousins of dinosaurs. These flying reptiles were the first vertebrates to have evolved powered flight with some species having grown to tremendous sizes. The largest pterosaur, Quetzalcoatlus northropi, stood 16 feet tall and had a wing span of 33 feet, which is the size some airplanes. They flew using a skin and muscle membrane that stretched across the first three fingers of their hands as well as between their shoulders and wrists to their hind limbs, creating their wings. Some pterosaurs also had the membranes between their legs.
The group of Pterosaurs lived from 228 to 66 million years ago, going extinct at the end of the Cretaceous along with the non-avian dinosaurs when the asteroid hit the Earth. It is theorized that these animals were possibly warm-blooded with some (possibly all?) having a furry coating of hair-like filaments over their bodies.
As pictured in the reconstruction above, pterosaurs are also known to have walked on all four limbs. Scientists know this from, not only reconstructions of the skeletons, but also fossilized trackways that preserved the hand imprints along with the feet. 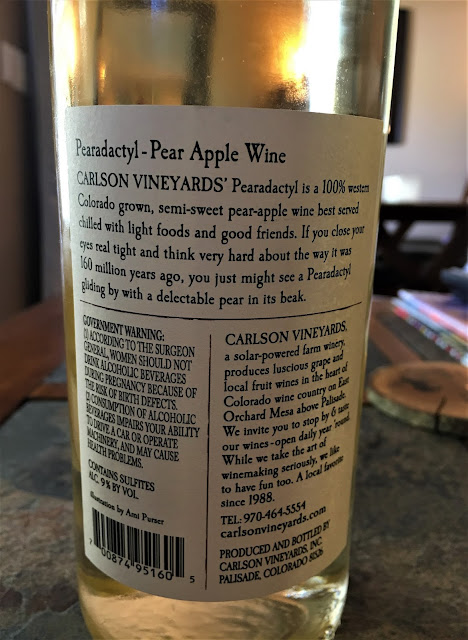 "Carlson Vineyard's Pearadactyl is a 100% western Colorado grown, semi-sweet pear-apple wine best served chilled with light foods and good friends. If you close your eyes real tight and think very hard about the way it was 160 million years ago, you just might see a Pearadactyl gliding by with a delectable pear in its beak."

Looking that the Pterodactylus itself, this species of pterosaur lived during the Late Jurassic period, approximately 150 million years ago. This matches fairly closely with the wine's listing of "160 million years ago". 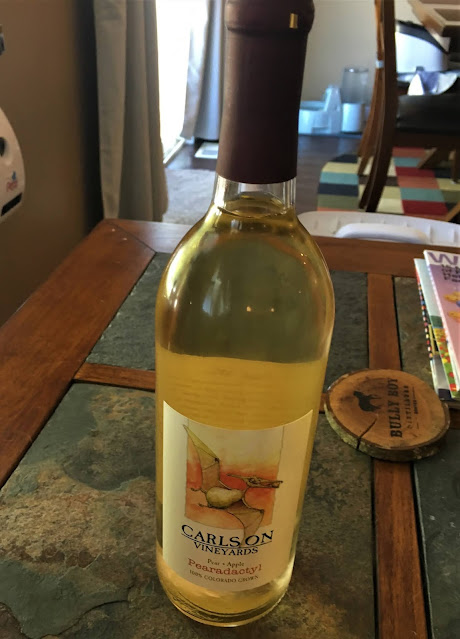 The bottle also mentions that the Pearadactyl would have been gliding by with a "delectable pear" in its beak. Pears, and pear tree in particular, belong to a group of plants known as angiosperms. Angiosperms include all of the flowering (and fruiting) plants that we know of today. Early angiosperms are thought to have evolved in the Early Cretaceous or the Late Jurassic, ~140-250 million years ago (Nature). Along with the evolution of the flowering plants, is the evolution of the fruit that they bear.

The pear fruit is a result of the domestication by humans of the pear tree and the cultivation over human history. The plant itself belongs to the Pyrus genus, which is estimated to have evolved only a few 10's of millions of years ago. However, it belongs to the larger group of the Rosaceae family of fruit trees. The Rosaceae family evolved ~100 million years ago, with several ancestral fruit bearing trees having existed alongside the dinosaurs and pterosaurs during the Cretaceous period. This means that although the "pear" would not have been present alongside the "Pearadactyl", perhaps an ancestral fruit would have been.