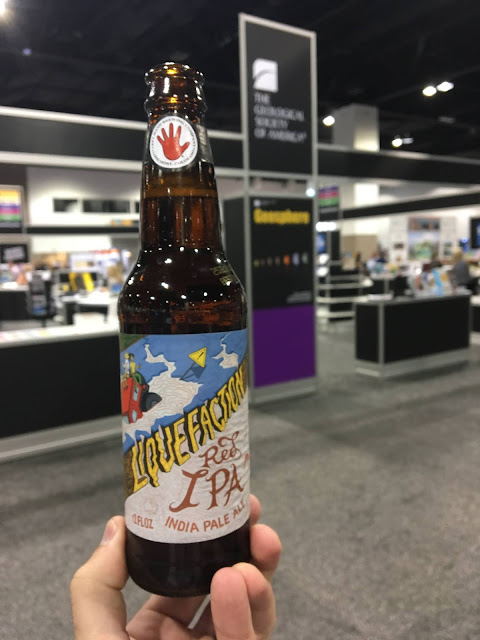 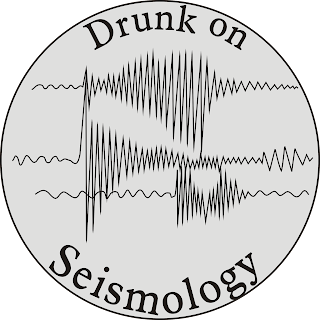 Like the Field Assistant Ale, this label is designed by Moxie Sozo and features a couple of geologists in a field vehicle that happened to get inundated within some liquefied sediment. A more complete view of the label can be seen below in the sticker that was given away at the meeting.

The impact that liquefaction can cause was especially notable during the February 6th, 2018 Taiwan earthquake. The earthquake was a magnitude 6.4 and managed to produce severe liquefaction damage, causing entire buildings to get swallowed up into the earth.
Water percentage plays a significant role in the degree of liquefaction, as well as the particle size and size/location of the earthquake. High water content and sandy soils are the most susceptible to major liquefaction. In earthquake prone locations, hazard maps are typically created to alert the public of liquefaction potential.

Knowing the potential degree of liquefaction can also make the case for stronger building codes, protecting not only the property put the people whom happen to be in those buildings at the time of the earthquake. And although sinking buildings is probably on the extreme end of liquefaction hazards, the biggest impact is just the ground moving like you are sitting on Jell-O during an earthquake. I did a demonstration a while ago on the effects of building on bedrock versus sediment during an earthquake by using Jell-O and Rice Crispy Treats. And although the model is simplified from real life, that makes it no less accurate. Buildings on sediment shake longer and harder than those built on bedrock, causing more damage for similar sized quakes.
at October 10, 2020

Email ThisBlogThis!Share to TwitterShare to FacebookShare to Pinterest
Labels: Beer, Drunk on Seismology