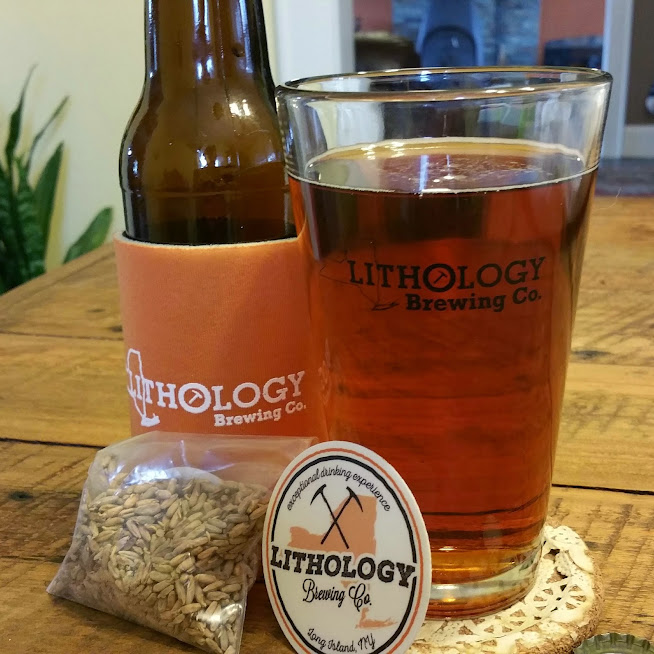 This is a unique entry because:
So what is the definition of "Lithology"? The definition of lithology is actually quite close to the definition of petrology (and this beer is the reason I went with "Drunk on Petrology" and not "Drunk on Lithology" as my category header, to avoid the confusion). The prefix "lith" means rock, and so generally, "lithology" can be considered the study of rocks. According to the Dictionary of Geological Terms, lithology is

"the description of rocks, especially in hand specimen and in outcrop, on the basis of such characteristics as color, mineralogic composition, and grain size. Or, the physical character of a rock."

The Lithology Kickstarter also has their own write-up on the definition of Lithology:

"WHY IS IT CALLED LITHOLOGY?

​​Lithology, a geological term, is the study of the physical characteristics of rock and sediment. Besides forming the land we walk on, rock and sediment are earth’s natural water filters, and since water is the basis of life (as well as beer) the connection seemed a perfect fit. The Lithology Brewing name pays homage to the sediments and rocks that filter our unique and delicious New York water. Think about it: What’s the key ingredient to making a true New York pizza? A genuine New York bagel? It’s the water! You can’t get exceptional New York food and beverages if you don’t recognize the water. And if all of that is too much to remember, you can always just say that Lithology Brewing rocks!"

Calling the beer "Lithology" on Long Island is an apt name, with it's wide variety of rock types and soils that are found on the island. Long Island formed when a end of a glacier paused in that location twice. When the end of a glacier stops advancing, the glacier itself keeps moving. It is like a conveyor belt where all of the rocks, soil, and other debris are carried along within the glacier until it gets to the end when the ice and snow melt and the glacier drops everything it is carrying. This junk pile of debris is called a glacial moraine, specifically in this instance a terminal moraine (terminal for the end line of the glacier).
Long Island has two terminal moraines running lengthwise along it. This shows us that the glacier paused twice on Long Island as it was slowly melting away. The image above shows us the locations of these moraine deposits. The southern terminal moraine is the Ronkonkoma Moraine, formed about 55,000 years ago. The northern terminal moraine is the Harbor Hill Moraine, formed about 18,000 years ago. The presence of these moraines, which are composed of till (the geological word for unsorted glacial debris), resulted in a wide variety of geologically diverse soils and beaches across Long Island from the very rocky beaches on the northern shore, to the nice sandy beaches on the southern shore. The soils across the island also vary dramatically, with some areas having soil made up of almost 100% clay to areas with 100% sand. Long Island is a fascinating geological resource because the rocks that make up the island, the till, is composed of rocks found towards the north of the island, all the way into Canada. That makes Long Island a treasure trove of rocks and minerals not often found condensed in one locality.
References
https://www.lithologybrewing.com/
https://www.usgs.gov/centers/ny-water/science/long-island-topography?qt-science_center_objects=0#qt-science_center_objects
at September 09, 2020